As seen its Diagram 1, Sinopec Kantons’ main business segments can be broken down into 4 categories:

Sinopec Kantons is the largest oil terminal operator in China, with a total of 7 ports with 37 berths and an annual handling capacity of 290m tonnes as at end 2019. It dominates the oil jetty VLCC market with ~40% of China’s capacity. Terminals are primarily used by the oil majors and local independent refiners (‘teapots’) for refining crude oil. This is done via connecting pipelines from the oil jetties to the storage tanks of the refiners. Most of the ports in its portfolio are jointly owned while the Huade Petrochemcial Port is wholly owned and hence only its financial results are consolidated. Nevertheless, operating oil jetties is the core business of Sinopec Kantons and it accounts for approximately 80% of its net profits in 2019.

It also holds a 95% equity ownership in a planned Batam project but that is currently under legal dispute. 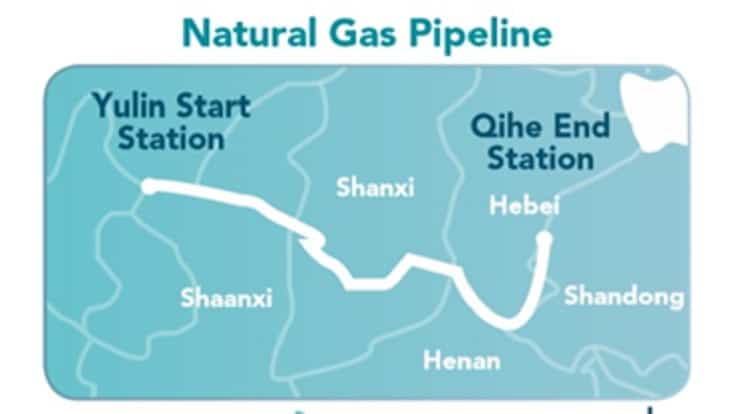 Given that it is a wholly-owned subsidiary, its financial performances are consolidated. In 2019, natural gas pipeline transportation revenue accounted for 59% of the Group’s revenue. This business segment is facing some headwinds at the moment which Heartland Boy shall elaborate later on.

Sinopec Kantons owns minority stakes in a total of 8 Liquified Natural Gas (‘LNG’) vessels which have been fully put into commercial operation since May 2019:

All 8 vessels are on 20-year fixed rates charter with Sinopec Group and this effectively guarantees their utilisation rates during the term of the contracts. There were some teething problems which affected profitability initially, but Heartland Boy expects this to be ironed out as time passes. As shown in Diagram 3, the chart illustrates that Sinopec Kantons has successfully increased its profits at a CAGR of 5.7% from the period of 2015 to 2019. Heartland Boy must emphasize that comparing revenue alone is not meaningful as many of its investments are in joint ventures and associates which are not consolidated at the top line. Instead, their returns are captured under “Share of results of Joint Ventures/Associates” in its Annual Report.

During the same comparison period, dividends paid out has experienced a CAGR of 41% as shown in Diagram 4. In 2019, dividend payout ratio also reached 39%, which was close to Sinopec Group’s 40% payout target. At a share price of $3.00, the trailing dividend yield is a juicy 6.7%. 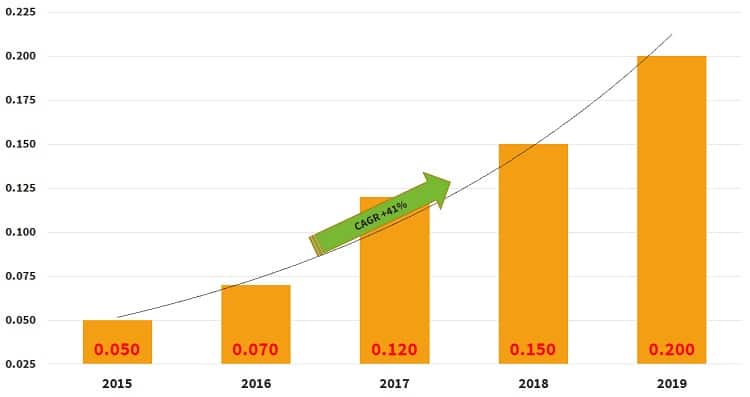 As a result of acquiring the Yuji pipelines in 2015, Sinopec Kantons has been in a net debt position since. Good news is that it has been aggressively paring down debt significantly over the years. This is made possible from the dividends that it receives from its various investments in joint ventures/associates as shown in the various charts of Diagram 5. For such a capital-intensive business, it is quite an anomaly how Sinopec Kantons has been able to function at such a low gearing ratio.

At a stock price of $3.00, Sinopec Kantons trades at 0.61X Price to Book. This is below 1 Standard Deviation as shown in Diagram 6. 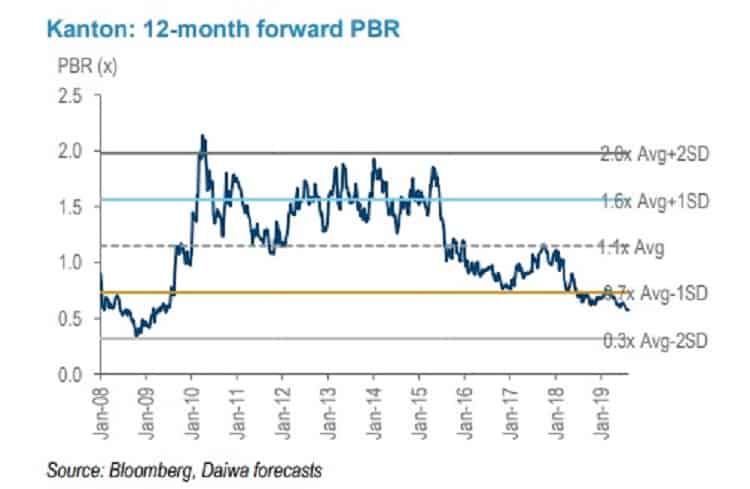 In addition, its Price to Earnings ratio is approx. 5.8X. On both P/B and P/E metrics, Heartland Boy thinks its valuation is cheap.

As reported by oilprice.com, crude oil imports rose by 5.2% yoy between Jan to May 2020 even though most of the time, China was under lockdown during this period. Crude oil transported by Very Large Crude Carriers (“VLCC”) need to berth at oil jetties, unload, store and subsequently be transferred to the oil refineries. All these equate to commercial activities at Sinopec Kantons’ oil terminals. Therefore, Sinopec Kantons can be seen as an indirect proxy to the insatiable demand of China’s growing middle class.

A low oil price environment actually has a slightly positive impact on Sinopec Kantons’ oil jetty and storage businesses. Oil majors (including parent company Sinopec) as well as teapot refineries will be encouraged to import more crude oil since cost of production is low. However, as much as these refineries would like to take advantage of historically low oil prices, their ability to do so would also depend on the available storage capacity in China.

In addition, more overseas clients will also want to buy crude oil at low prices and store them at Sinopec Kantons’ offshore oil storage terminals in UAE and Europe. However, despite expected improved business performance in this segment, it is unlikely to meaningfully affect the overall profits of Sinopec Kantons due to its small scale.

In December 2019, Sinopec Kantons made an announcement that it is exploring a spin-off of its Yuji gas pipeline asset to China Oil & Gas Pipeline Network Corporation (“PipeChina”). The Chinese government is still finalizing the list of pipeline (crude, gas and refined products) and terminal assets to be injected into PipeChina. As one of the National Oil Company (‘NOC’), Sinopec Group would eventually have a 20% stake in PipeChina. Let’s recall that Yuji pipelines was acquired for RMB 2.57 billion in 2015. Based on the initiation report by Haitong Securities dated 9 June 2020, Yuji’s valuation on Sinopec Kanton’s books stands at RMB 2.32 billion as at end FY2019.

Heartland Boy believes that the sooner this divestment takes place, the better it is for shareholders of Sinopec Kantons because of these 2 reasons:

As the Yuji Pipeline is likely to be just a very small asset in PipeChina’s books, Kantons’ Management is likely to reject a share offer since it cannot exact control in PipeChina. Therefore, Heartland Boy thinks that any divestment is more likely to be a cash offer instead and turn Sinopec Kantons into a net-cash company post divestment. Regardless, Heartland Boy believes that unlocking value for a troubled asset would do wonders to Sinopec Kantons’ share price since the divestment will be accretive. We need to look no further than our local shores to see the effect it has on Sembcorp Industries.

At the end of 2019, Sinopec Kantons announced that it received 2 arbitral awards from the ICC Court with regards to the Batam Project. However, given the current economic environment and the difficulty of litigating in a foreign country, it remains to be seen if the verdict can be enforced. It is a possible catalyst, but Heartland Boy will not pin his investment thesis on it.

In 2019, the natural gas transmission volume of Yuji Pipeline decreased 14% to reach 3.99 billion cubic meters. This was due to insufficient supply from the upstream natural gas fields connected to the Yuji pipeline. This was compounded by the diversion of transmission volumes caused by the commencement of operations of the Erdos-Anping-Cangzhou Gas pipeline as it became interconnected with Yuji pipeline. Less volume transmitted inevitably led to declines in revenues.

Secondly, the next round of tariff review could be looming in September 2020. This would be the same exercise conducted in 2017 by National Development and Reform Commission (‘NDRC’) which led to reductions in tariffs levied by Yuji.

Sinopec Petroleum Holding is not only the parent company of Sinopec Kantons, but it is also its biggest customer that accounts for more than half of its revenue. There is clearly a lack of customer diversification. However, it can be a good or bad thing as Sinopec Group is a major oil company with solid financial fundamentals.

Sinopec Kantons’ reporting currency is in Hong Kong Dollars and that differs from its principal functional currency of Renminbi. If RMB depreciates against the HKD, it will lead to a fall in earnings. Unfortunately, with the US-China trade war, RMB has depreciated against the HKD recently. As a Singapore-based investor, Heartland Boy is further exposed by the fluctuation between SGD against HKD.

Most of China was on an enforced and prolonged shutdown during the Chinese Lunar New Year. As a result, many factories were closed and consumption of energy would inevitably fall. Heartland Boy forecasts the volume of natural gas transmitted as well as the activities at the oil jetties to be impacted during this challenging period.

For instance, DBS Vickers reported that refinery utilisation rates fell to 60% and 40% for SOE and teapot refiners respectively in early March. However, it has since recovered to 71% and 76% respectively in May 2020. Despite the rebound, this would still cause a short-term and temporary dent to Sinopec Kantons’ financial numbers.

Heartland Boy likes Sinopec Kantons because it is a stable and (boring) business that rewards patient shareholders with an increasing dividend yield of ~6.7%. Unlike Riverstone Holdings, he is not expecting it to experience explosive profit or share price growth in the near term. Moreover, 1H2020 results are likely to be lower yoy to account due to the Covid-19 situation affecting China significantly during 1Q2020. However, (i) China’s increasing appetite for crude oil and the (ii) potential sale of its gas pipeline assets are catalysts for share price growth in the mid-term. Meanwhile, Heartland Boy is contented to be rewarded with a generous dividend yield while waiting for the following catalysts to materialize.

Analysts reports from JP Morgan, Daiwa and Haitong Securities have target prices of 3.79, 3.70 and 3.49 respectively.

« How I Easily Saved Over $14,000 By Refinancing My Home Loan
Review of Income 3-Year Endowment Plan: Gro Capital Ease »