Riverstone Holdings Limited (‘Riverstone’) is a leading global supplier of cleanroom and healthcare gloves headquartered in Malaysia and listed on the Singapore Stock Exchange (‘SGX‘). Riverstone IPO-ed in Nov 2006 at 12 cents with a ticker code SGX:AP4. As at 24 April 2020, it has a market capitalisation of SGD$881 million. The business model of Riverstone is plain and simple; it predominantly manufactures 2 types of gloves to be sold to its clients. As seen its Diagram 1, Riverstone’s main business segments can be broken down into (i) Cleanroom and (ii) Healthcare.

Riverstone is the leader in the cleanroom glove segment, commanding close to 60% global market share for Class 10 and Class 100 high-tech cleanroom nitrile gloves. It exports its gloves to customers mainly in the Hard Disk Drive (‘HDD’), semiconductor and high-tech electronics industries. Customers generally face a high supplier switching costs as it implements a vigorous supplier selection process to cut contamination risks. Therefore, Riverstone’s technological know-how and established customer base results in a sustainable competitive advantage that often sets it apart from its competitors.

Compared to the more commoditized healthcare glove segment, the cleanroom glove segment boasts a higher gross margin of between 37-40%.

As a result of the 2008 global financial crisis which severely affected its cleanroom customers, Riverstone made the strategic decision to diversify from the cyclically sensitive but higher margin cleanroom segment into the more defensive but lower margin healthcare glove segment.

Demand from healthcare, pharmaceutical and food-related industries continue to drive demand for healthcare gloves which often serve as a form of inexpensive protective barrier. However, competition in nitrile healthcare gloves is very stiff owing to the influx of capacity from the Big 4 glovemakers (Top Glove, Hartalega, Kossan, Supermax) in Malaysia. As a result, Riverstone’s gross margins for healthcare gloves plummeted from 25% in 2009 to 13% in 2019. Therefore, as much as possible, Riverstone tries to compete on quality instead by customizing its healthcare gloves for its customers.

Any worldwide diseases outbreaks would provide shot in the arm for healthcare glove demand. COVID-19 struck in late Dec 2019 and it has galvanized demand for medical equipment, including healthcare gloves. However, the arrival of the COVID-19 pandemic would have counted for nothing if Riverstone does not have spare/additional capacity to react. In an interview with Business Times, its Executive Chairman and CEO Wong Teek Son revealed that Riverstone is in a race to meet global shortages of healthcare gloves. Its current capacity is already running at near full capacity of 93% and Riverstone even had to turn new customers away as it prioritized the demands of its existing clients first. It is even able to produce surgical masks. This is in sharp contrast to CNMC Goldmine, which has been struggling to maintain operations and hence unable to take advantage of rising gold prices.

With its production lines running at maximum capacity, the gross margins for healthcare gloves is expected to improve from 13% to 15% due to operating leverage. Based on FY2019 sales data (Healthcare took up ~68-70% of 2019 revenue), the improvement in gross profit margin is equivalent to an additional RM13 million (10% of FY2019 Net Profit).

In the immediate term, Phase 6 of Riverstone’s current expansion would commence full operations by 2Q 2020, bringing its total capacity to 10.4 billion gloves per annum. As phase 6 is fully integrated with surgical glove production capabilities, it would allow Riverstone to increase production of this higher-margin product within the healthcare segment.

Beyond Phase 6, Riverstone is embarking on a 3-year expansion with the 18.4-acre land that it purchased in Taiping, Malaysia. When completed in FY2022, Riverstone’s production would be raised to 14-15 billion gloves per annum and boasting a greater variety of products. As shown in Diagram 2, the chart illustrates that Riverstone has an unblemished track record in increasing its revenue, profit and operating cashflow. It is a growth company that is able to generate positive operating cashflow on a consistent basis. This characteristic lends further resilience to its balance sheet.

Riverstone has an enviable balance sheet, especially critical in times like now, that its investors would definitely come to appreciate. According to its latest Annual Report, it is sitting on a net cash position of RM117 million. This suggests that Riverstone does not have to worry about any debt refinancing and more importantly, is able to finance its capital expenditure wholly via internal funds to take advantage of the global shortage of healthcare gloves. 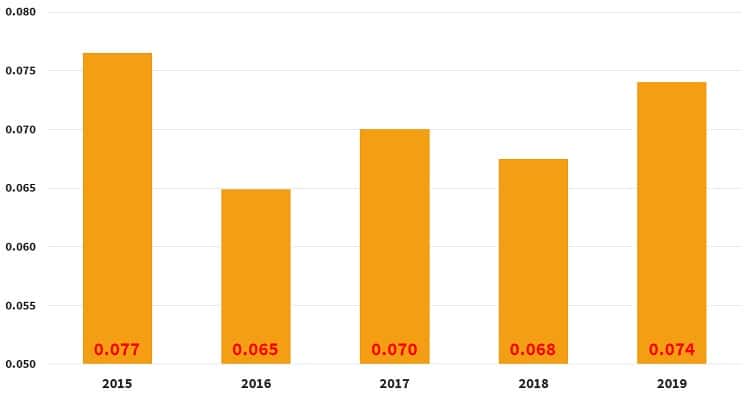 As shown in Diagram 3, it paid out dividends amounting to RM 7.4 sen in 2019, representing an earning payout ratio of 42%. Based on a share price of 1.19, this represents a dividend yield of 2.0%. On the contrary, Heartland Boy would very much prefer that Riverstone retains the earnings and deploys them for greater expansion plans.

Riverstone’s share price was not spared from the desperate sell-off in March 2020 and plummeted to a 52-week low of 0.685. While others were busy offloading, Mr Wong Teek Son saw a bargain and was busy scooping them up on the other side. Even till today, he probably feels that Riverstone is deeply undervalued as his buying can only be described as incessant (see Diagram 4). This gives Heartland Boy great confidence as his average entry price was below the CEO’s most recent purchase. This potentially serves as a floor to its stock price, at least until a couple of weeks before its next financial results announcement.

6. Trading At Discount to Peers It is important to note that since Jan 2018, Riverstone has always been trading at an average discount of approx. 40% compared to its peers as shown in Diagram 6. However, this valuation gap has widened considerably to 50% in the past quarter.

In addition, Riverstone is also riding on several macro tailwinds.

Heartland Boy would like to caution that the very same macro tailwinds that are currently in favour could of course turn into headwinds for Riverstone in the future as well.

In the same interview with Business Times, Riverstone’s CEO revealed that its manpower capacity has been capped to 50% during Malaysia’s Movement Control Order (‘MCO’). Since the majority of Riverstone’s factories are located in Malaysia and its automation process is still relatively behind when compared to its peers, Heartland Boy is uncertain how much of its production output would be affected. The CEO did say that MARGMA is lobbying the government hard on this issue though.

Heartland Boy feels that the widening of the discount to its peer group is uncalled for in the current context. Therefore, if Riverstone just maintains its historical trading discount to its peer group, its share price should be valued at $1.43 instead, representing a 20% upside from the current share price. Analysts reports from DBS Group Research and CGSCIMB have target prices of 1.34 and 1.30 respectively.

Vested at an average price of $1.11 since Feb 2020. He will continue to share his thoughts of Riverstone Holdings Limited on forums such as InvestingNote.