ISOTeam is founded in 1998 and listed on the SGX Catalist in July 2013 at an IPO price of $0.22 (equivalent to $0.11 today after a 1 for 1 bonus split in 2015). It is founded by David Ng (Chairman), Antony Koh (CEO) and Danny Foo (Director of Operations). The founders collectively own 42.1% stake in ISO through their investment vehicle, ADD Investment Holding Pte Ltd. Therefore, they still have their skin in the game.

As described in its annual report, ISOTeam is an established service provider of repairs, maintenance and estate upgrading works for public and private real estate with a proven track record in eco-conscious solutions. Its operations are housed under 4 main business divisions as shown in Diagram 1. ISOTeam is recognised as one of Singapore’s top service providers in the R&R segment. It provides repainting, redecoration, waterproofing and repairs services to the public and private sector. Having been awarded a L5 financial grading by Built Construction Academy (‘BCA’), ISO is qualified to tender for projects up to SGD 13mil. Given that it is mandatory for the walls of Housing Development Board (‘HDB’) flats to be repainted every 5 years, ISO has repeatedly clinched contracts from the various town councils. This also implies that it faces low counterparty credit risks since the government is a good paymaster. In the latest 1H2017 results announcement, this business division contributed to 23.7% of total revenue.

Other complementary niche services are housed under this category. It has grown this segment inorganically as it aims to be a one-stop provider of building and maintenance services. Examples of complementary services are landscaping, handyman, interior design and eco-friendly solutions. In the past year, its subsidiary, ISO-Landscape, installed rooftop garden on the multi-storey carpark at Jurong West. Another subsidiary, Zara@ISOTeam, also completed the interior design contracts of Aloha Changi Chalets. This business division contributed to 19.3% of total revenue in 1H2017.

ISO’s revenue and net profit have consistently increased since its listing in 2013 to 2016. It has registered impressive CAGR of 25% and 15.3% for revenue and profit respectively during this period. Its net operating cashflow has also increased to reach $15.6 million in FY2016. This implies that it only takes approximately another 7 years of operating cashflow generation to cover its current market capitalization.

ISOTeam’s gross operating margins have increased from 19% in 2014 to reach 28% in 1H2017. It has also maintained a healthy net profit margin in the region of 10%. These are strong signals that it is able to withstand price and cost pressures to maintain its margins.

Its Return On Equity reached 23.6% in 2014. As it continues to generate and accumulate profits for the shareholders, the ROE has inevitably declined to 15% in 2016. Nonetheless, this still exceeds the 12% benchmark that Heartland Boy sets for all his investments. 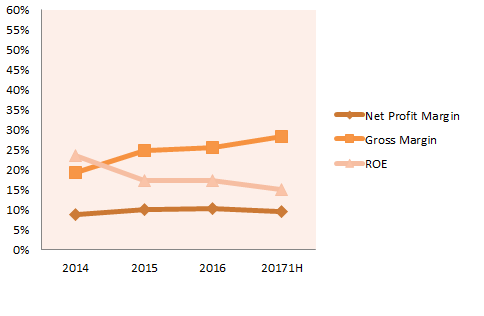 ISO is in an enviable net-cash position, largely due to its strong net operating cashflow generation capability as aforementioned. It has more cash than debt and this net cash position translates to $0.07 cents per share, or roughly 17% of the current share price.

According to Bloomberg, at a stock price of $0.41, it has a current dividend yield of 1.8%. While this is not a dividend yield to crow about, it has increased dividends every year since it started paying dividends in 2014. Furthermore, it has institutionalized a formal dividend policy of paying out at least 20% of the company’s consolidated profit (after tax and minority interests, excluding non-recurring, one-off and exceptional items).  Therefore, if ISO continues to make increasing profits, its dividends shall continue to increase.

As at 26 January 2017, ISO announced that its orderbook has reached a record high of $107.1 mil. This will be progressively delivered over the 2 years. This marks a continued trend of an increasing orderbook and hints at the sustainable competitive advantage that it possesses. ISOTeam has increased its orderbook since its listing (Source: ISOTeam Limited)

Several reasons are behind its ability to grow its orderbook since its public listing.

In addition to its sustainable competitive advantage, ISO has plenty of strong growth drivers going at the moment.

ISO operates in a labour-intensive business. Therefore, its margins are sensitive to labour costs. In the recent Budget 2017 announcement, the government has mandated that the increase in foreign worker’s levy will proceed as planned for the construction sector. This will undoubtedly add pressure to ISO’s margins. As such, Heartland Boy will be very mindful of its gross margins, especially from 1H18 onwards when the planned hike takes full effect. Management has acknowledged this concern. Besides implementing more productive measures, it will also expand more aggressively into the A&A and C&P space where higher margin projects are available.

The misconception is that ISOTeam’s business is as boring as watching paint dry. That is true to a certain extent, and generally, it may not be a bad idea to own a stable business that allows the shareholder to sleep soundly at night. However, a deeper analysis into ISO would reveal that it is in a good stead to benefit from several growth drivers. The early signs are positive as it has already made several inroads with good momentum. By being a provider of a comprehensive suite of building and maintenance services integrated with green initiatives, it is well placed to seize the various growth opportunities present.

Heartland Boy has a personal price target of $0.59 on ISOTeam Limited.

Vested at an average price of 39.5 cents since February 2017 when Technical Analysis was bullish.