Sunningdale Tech Limited (‘Sunningdale’), headquartered in Singapore, is listed on the Singapore Stock Exchange. Sunningdale is a one-stop precision plastic engineering company that provides capabilities in the entire value chain starting from product and mould design to ultra-precision high cavitation tooling and injection moulding to finish processes such as laser etching and ultrasonic welding and finally, the precision assembly of complete products. It has a global presence in Singapore, China, Europe and America. Its business can be segmented into the following: (i) automotive, (ii) consumer IT (iii) Healthcare and (iv)Tooling. Since the automotive and consumer segments contribute to over 70% of the group revenue, this initiation report will focus on these 2 segments in greater detail.
Similar to Innovalues, Sunningdale is a Tier 2 supplier that supplies products to Tier 1 manufacturers in the automotive industry. It produces sunroof and lighting systems, trim plates for automotive stero systems, navigation systems, speedometers, steering switches and design covers. In the consumer IT segment, it supplies Xbox One controller buttons, smart cards as well as telecommunication keypads. It deliberately chooses to focus on niche products for the mid to high end market for better margins. As such, it is not surprising to note that Sunningdale has a well-diversified blue chip customer base.

Revenue has remained generally stable from 2012 to 2014 but experienced an explosive growth in 2015. This can be attributed to its shrewd acquisition of First Engineering in late 2014. It is even more pleasing to note that the growth of net profit and net operating cashflow were at an even faster pace than revenue.

What excited Heartland Boy the most is the exponential growth in net operating cashflow in 2015 which reached S$67 million. After deducting capex requirements of approx. S$ 25 mil per annum, it would only take less than 5 years for Sunningdale to produce enough free cash flow to match its current market capital! 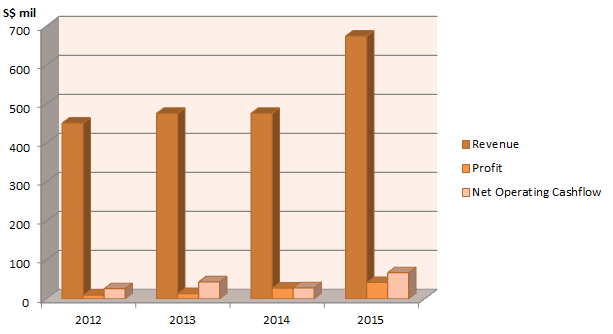 Sunningdale has consistently increased its gross and net profit margins since 2012. Improvement in Sunningdale’s margins can be attributed to:

• Increase in capacity utilization due to more contract wins
• Improved operational efficiency after the acquisition of First Engineering
• Strengthening of the USD- a currency its goods sold are denominated in
More importantly, its ROE is also improving gradually over the years to meet the 12% benchmark that Heartland Boy expects from its investments. 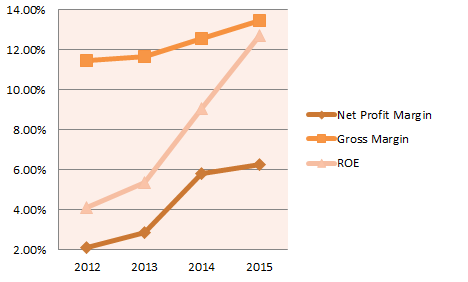 It has utilised the cash generated from its strong operating performance in 2015 to pare down a portion of its debt, causing it to be in an enviable net-cash position. With interest rates forecast to increase in 2016 and beyond, Heartland Boy always thinks this is a comforting fact to know.

At a stock price of $0.98, it has a solid dividend yield of 5.1%. The dividends have increased since 2013, in tandem with the financial performance of the stock. This is a good sign that the Board would reward shareholders handsomely if the company improves on its performances.

Chairman Koh Boon Wee has been periodically purchasing the shares since early 2015, increasing his shareholding from 6.8% to 8.8%. Even though the price of Sunningdale has surged approximately 20% in March, he continued to scoop up the shares consistently. Insider buying is always a good indication that the stock may be undervalued in the eyes of insiders.

Management guided that the Chuzhou factory will be ready by end 2016. Shareholders can expect significant cost savings since labour cost in Chuzhou is significantly less than that of Shanghai. However, the biggest growth story has to be the continued integration of First Engineering. Operational cost savings is often a given in such circumstances but Management has hinted at more synergies down the road. For instance, it successfully cross-sold First Engineering plants to existing customers of Sunningdale in India.

As Sunningdale collects most of its revenue in USD and has its costs denominated in SGD, MYR and RMB, it benefitted at both ends from the currency swings. It is important to note that Sunningdale recorded S$19 million in foreign exchange gains in 2015 and this was a significant contribution to its record performance in 2015. Management admitted that some of its customers have requested for price cuts to share some of the exchange rate gains. Heartland Boy would be watching the gross margins in the next few quarters to detect any pricing pressure.

2. Underperformance of the South China factory

Management seem unable to improve the utilisation of its factory in South China and had put it down to a change in the supply chain strategy of its 2 major customers. The slowdown of the Chinese economy is also not helping Management achieve its aim. Readers should note that the performance of Sunningdale is tethered to the economic performances of China, Hong Kong, Singapore and Malaysia.

Heartland Boy has personally kept Sunningdale under his watch list since September 2015. He only bought when there were signs that the technical indicators were going to turn bullish.

Heartland Boy has a personal share price target of $1.50 for Sunningdale which would see it rate closer to its peers on SGX at P/E 6.7X. This is slightly higher than the various analyst reports.

Vested at 84 cents since 24 Feb 2016 and twitching to add more since this stock represents deep value.