Innovalues, headquartered in Singapore, is founded in 1997 and listed in 2001 on the Singapore Stock Exchange (SGX). It is a precision component supplier in 2 different business segments; (i) automotive   and (ii) office automation. It has factories in Malaysia, China and Thailand. Since its automotive unit generated 80% of FY2014 revenue, this initiation report will concentrate largely on this sector.

Innovalues produces components for end-products such as sensors that are mainly used for vehicular safety systems, with an emphasis on energy-saving and environmental-protection functions.  For instance, Innovalues produces the cylindrical metal housing of engine oil control valves. These valves are used to calibrate the amount of gasoline and oxygen entering the engine piston chamber where they are mixed together.

Innovalues supplies to Tier 2 clients such as Sensata and Hilite, who in turn supply to Tier 1 clients such as Volkswagen, Ford, General Motors etc. Hence, it is easy to understand that demand for Innovalues products is largely dependent on new automobile sales. This business model is similar to Sunningdale.

Let’s see how Innovalues fare on its Fundamentals.

Other than a blip in 2013, revenue, earnings and operating cashflow are on an upward trend for the past 3 fiscal years. More importantly, FY2015 earnings are almost guaranteed to outperform FY2014 as 9M2015 financial figures already matched the entire 2014! Meanwhile, strong net operating cashflow can also be observed and has been stable at around S$ 24 million per annum. 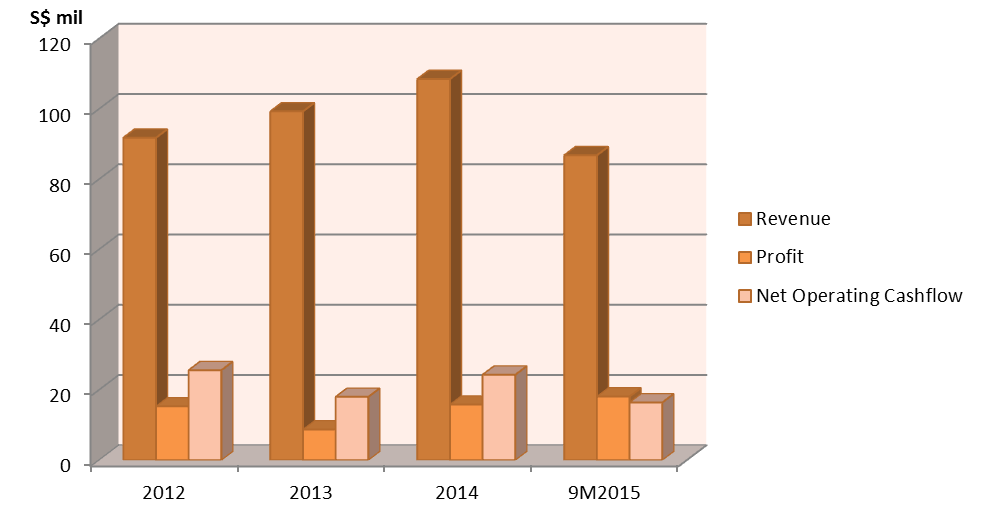 It has consistently increased its gross and net profit margins since 2012. Improvement in Innovalues’s margins can be attributed to:

Consistently exceeded 12% ROE for the past 3 years, which is the minimum benchmark that Heartland Boy is prepared to accept. With interest rates forecast to increase in 2016 and beyond, Innovalues is in an enviable position of having sufficient cash to repay all of the loans it has undertaken. It has more cash than debt and this net cash position translates to $0.05 cents per share or roughly 6% of the current share price.

At a stock price of $0.78, it has a dividend yield of 3.3%. Given that it has a dividend policy of [(EBIDTA less Tax less Capital Expenditure less Loan Repayment)/2] and that capital expenditure is likely to remain minimal and stable in FY2016, there is an opportunity for a dividend hike at the 4Q2015 results’ announcement.

Chairman and CEO Goh Leng Tse also bought 1,000,000 shares at $0.25 per share in August 2014. Insider buying is always a good indication that the stock may be undervalued in the eyes of insiders. This is not surprising as barring any economic downturns, Management guided for revenue to increase approximately 20% per annum for 3 years from FY2015 onwards.

Innovalues has a strong growth story as demand for its products are increasingly spurred by ever stringent government regulations to improve fuel efficiency, control pollution and improve passenger safety. The recent landmark accord in Paris further underlined countries’ resolve to lower greenhouse emissions and be more environmentally friendly.

Automotive sales have been on a tear these few years with both United States and China supporting demand. These are largely driven by an improving economy in United States as well as a growing consumer class in China. However, the slowdown in China’s economy and rapid decline in the Chinese stock market this summer caused automotive sales to plummet temporarily. Therefore, it is imperative that readers should be well versed with the health of the automotive industry and here are a few research sources to track automotive sales of key markets:

As the products of Innovalues are used in Volkswagen suite of vehicles, there ought to be concerns on the implications of Volkswagen emissions scandal. However, according to a Maybank report, Volkswagen only became new clients in late 2014 and their direct revenue contribution is still insignificant at less than 1%.

Heartland Boy has personally kept Innovalues under his watch list since June 2015. He did not buy in during the correction in August as he was wary of the rapid slow down in vehicle sales in China. He did not buy in October again as he was wary of the impact of the Volkgswagen emissions scandal on its business. Only after these twin risks had been satisfactorily addressed and Innovalues’s charts turned bullish did Heartland Boy make his first investment into Innovalues.

Heartland Boy has a personal price target of $1.03 on Innovalues.

P.S. Innovalues made an announcement that it is pursuing a M&A event. It has been privatised by Northstar. Readers may find news about Innovalues on stock forums.