Japan Foods Holdings Limited (‘Japan Foods’) is a leading Food and Beverage (’F&B’) Group specialising in quality and authentic Japanese cuisine. It is established in 1997 and listed on the Catalist Board of SGX in 2009 (stock ticker SGX: 5OI). In Singapore, Japan Foods operates a chain of restaurants under 7 franchised brands. Some of the popular franchise brands are shown and explained below.

Ajisen Ramen is also available in Malaysia and Vietnam through sub-franchisees arrangement. Meanwhile, the Menya Musashi brand is available in China and Hong Kong through Ajisen China Holdings Limited, an associate company of Japan Foods listed separately on the Hong Kong Stock Exchange.

Besides relying on franchised brands, Japan Foods also undertakes R&D efforts to develop its own brands. Examples of self-developed brands include Fruit Paradise and Drink Curry (launched in January 2018 at Changi City Point). Furthermore, it has tried to diversify from Japanese cuisine by bringing in the New ManLee Bak Kut Teh franchise from Malaysia even though that has not panned out quite well thus far.

Overall, the business model of Japan Foods is really simple to understand. Being in the F&B industry, it restaurants are dotted over most shopping malls in Singapore. Therefore, the products of this share are highly visible and accessible to the man on the street.

Given that only 6 in 10 restaurants survive beyond their first 5 years, Japan Foods has had a satisfactory track record in the cut-throat F&B industry thus far. Analysing its 7-year track record, its revenue has grown moderately at 4.5% compounded annual growth rate. Net profit had risen at a CAGR rate of 11.1% which is a direct result of its relentless control over gross margins. The other attractive part of the business is its high net operating cash flow, which grew at an average of 9% annually. Margins are everything in the F&B industry and this is probably the area that impressed Heartland Boy the most about Japan Foods. It has kept a tight rein over ingredient costs by deploying a combination of bulk purchasing strategy and efficient centralization of food production. As Japan Foods operate more outlets, this is a natural economies of scale that it can enjoy. As such its margins had increased from 78% in 2011 to 85% in 2017.

Japan Foods’ ROE for the past 7 years have exceeded the 12% ROE benchmark that Heartland Boy sets for all his stocks. This is commendable as Japan Foods has not been using debt to boost its ROE.

It’s positive free cash flow model has allowed it to increase its cash position over the years and clear its initial debt. It currently has over just over $20 million of cash and cash equivalents, and this translates to 12 cents per share, or equivalent to 25% of the current stock price.

Furthermore, Japan Foods operates on a negative cash conversion cycle of approx. 15 days. This means that it takes an average of 15 days for Japan Foods to pay its suppliers after first collecting cash from the diners. This is extremely positive for working capital as less cash has to be tied up in the daily operations of the business.

Management has communicated its intention to increase the minimum dividend payout ratio to 50%. In the first half of its 2018 reporting year, the interim dividend had already increased from 0.75 cents to 0.8 cents. Given that its 3Q18 results were fantastic and should sustain into 4Q18, Heartland Boy is expecting full-year dividend to be between 2.3 to 2.5 cents. At a share price of 47 cents, the current 12-month trailing dividend yield is a respectable 4.4% 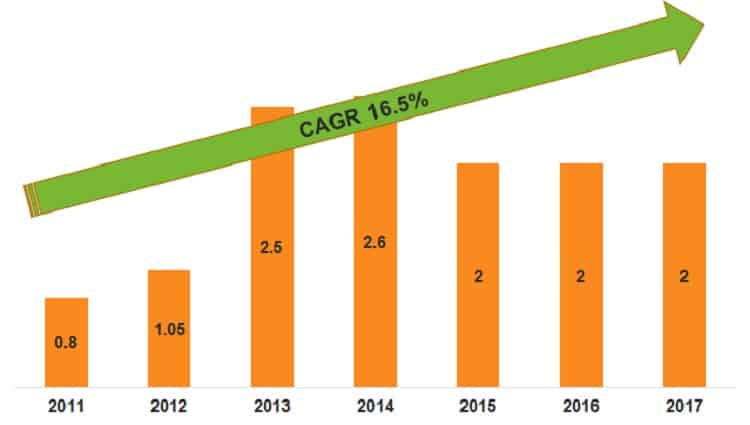 Other shareholder-friendly actions including buying back shares from the open market, the last of which took place in December 2017 at 41 cents per share.

A quick research on Bloomberg and Yahoo Finance revealed that management has a high ownership (eg: CEO Kenichi Takahashi owns 66.4%) in the company. Just like Heartland Boy, there is plenty of skin in the game for them as well. Hence, their interest should be strongly aligned with shareholders as a result.

Operating as an F&B group with an extensive portfolio of brands, Japan Foods enjoys some form of negotiating power when it comes to leasing spaces in retail malls. Think Zara with Pull & Bear, Bershka, Stradivarius, Massimo Dutti and you get the drift. Furthermore, Japan Foods has the flexibility to replace underperforming stores into other brands under its Group. For instance, it had on previous occasions converted Ajisen Ramen to Menya Musashi when Menya Musashi was gaining popularity. This helps to improve the revenue per square feet for Japan Foods.  This is a competitive advantage that its Management has constantly outlined in its Annual Reports and investor communication sessions.

With 49 restaurants in Singapore, Japan Foods is significantly tethered to the Singapore economy. The Singapore economy did well last year, with GDP growth estimated at 3.5% compared to 2% in 2016. This is a significant improvement and as the growth trickles down, households would find that they have more disposable income to spend. Heartland Boy thinks that Japan Foods would be the first to benefit from the improved consumers’ sentiments. By selling predominantly affordable mass-market Japanese cuisine (Ajisen Ramen comes to mind), Japan Foods will attract crowds who could now afford to upgrade to dining at restaurants more frequently as a result of an improved Singapore economy.

Furthermore, in the F&B industry, there is typically a presence of high fixed costs (rent, labour) as a proportion of total costs. Therefore any change in sales volume for Japan Foods will disproportionately impact its profitability. This is evident in its results announcement for 3Q18 whereby a 12% increase in revenue lifted EBIT by 82%. Therefore, given how well the Singapore economy had performed in 2017, especially 4Q17, Heartland Boy has high hopes that this will translate into an uptick for the top line of Japan Foods. The management of Japan Foods constantly relies on its extensive network to scour for the best culinary brands in Japan. The latest addition to its portfolio of franchise brands is Shitamachi Tendon Akimitsu- a culinary institution steeped in Japanese food culture. It first opened in Plaza Singapura in July 2017 to long queues and positive reviews from food bloggers. Delighted at the great response, Management has acted quickly and added 4 more restaurants in Vivocity, Westgate, Northpoint and Changi Citypoint since then. In just under 5 months of 2017 alone, Tendon Akimitsu contributed to $2.5 million in revenue. These are pretty impressive numbers and Management has labelled this a “rising star” during its recent financial report slides.

Realising that the customers might have gotten too “fatigued” with the offering of Ajisen Ramen, Management decided to rebrand 4 existing outlets into “Den By Ajisen” Feedback has been positive and same store sales growth had increased in the recent reporting quarter. This is a clear sign that this “rebranding” has been effective. The F&B industry is an industry that Heartland Boy doesn’t really like to invest in. Barriers to entry are very low; labour is difficult to source while rents are often subject to upward reversions from REITs. If you subject the F&B sector to the Porter’s Five Forces analysis, it does not hold up well either. Therefore, it is unlikely that Heartland Boy will be holding on to Japan Foods for the long haul and he will be tracking these 2 indicators very closely.

Japan Foods was granted an exclusive franchise to operate in Singapore, Malaysia, Indonesia and Vietnam for 50 years from 2008. Therefore, it still has a very long way to go before the franchise agreement reaches expiry. However, franchise arrangements with long expiry like this are not common. Therefore, the other franchise brand rights could be granted for only a term of 10 years and subject to further renewals.

It is interesting how Heartland Boy chanced upon Japan Foods. He started noticing malls getting more crowded in the fourth quarter of 2017. Thinking on how he could participate in the improved consumer sentiment, he decided to focus on stocks that rely on discretionary spending. Hour Glass came to mind as it was a stock he had analysed in 2014. Eventually, he realized that Japan Foods has several tailwinds (strong Singapore economy, entry of Akimitsu, rejuvenation of Ajisen brand) working for it.

Heartland Boy has a personal target price of $0.73 on Japan Foods Holdings.

« Turning 30: What Shaped My Values On Personal Finance
How To Get The Highest Interest Rates On Your Bank Savings Accounts »